Covid -19
The Scottish Avalanche Information Service issues information to support permitted activity under current Scottish Government guidance.
Please be aware of current mandatory travel restrictions inÂ Local AuthorityÂ areas within Scotland and respect local communities by referring toÂ Scottish Government guidanceÂ and safe route choices for exercise. For further guidance please refer to the following information forÂ hillwalkers and climbersÂ andÂ snowsports on ski and board.
This blog is intended to provide hazard and mountain condition information to help plan safer mountain trips.
You know that it is going to be an exceptional day when it starts with a snow ‘Tornado’ ripping through Ballochbuie Forest, with debris getting lifted up inside it and accompanied by the sound of breaking tree branches. When said tree branches were all cleared off the track, I made it out onto the hill to inspect a class one avalanche that had just been triggered by a skier heading up hill across a Westerly slope at a height of 415m. He had stopped when a crack shot out from under his ski and the slab released about 10 to 15 metres beneath him on a convexity. The crown wall at its highest was about 75cm. It wasn’t wide and dropped onto flatter ground pretty quickly but it would have still been an unpleasant experience if it had triggered right under his skis.
Later on that day at 650 metres on a Northerly aspect, I settled the snow bowl I was investigating – a sudden slope movement accompanied by a very loud ‘woompf’. Interestingly the shooting crack went out and then up and around the bowl – easily 15 metres in one direction and then up and around for another 30 metres. The culprit this time wasn’t fresh windslab but our old ‘friend’ Â – the deep-seated weak layer – facetted crystals buried beneath or above melt-freeze crusts.
The third incident was news that an avalanche had come down and run across the A93. We’ve been expecting this ever since the winds swung Easterly but it was the heavy drifting on the storm force to severe storm force South-Easterlies that tipped the balance today.
So, very careful route choice required at present – choose exposed slopes and ridges, easier angled slopes or terrain where the consequences of triggering a slope are not significant. There is a lot of snow out there and the snowpack is complex due to the prolonged, cold temperatures we have been experiencing.
Thanks to Kenny from BMRT for the shout about the Queen’s Drive release and Kevin from BMRT for the heads up about the A93/Creag nan Gabhar avalanche. 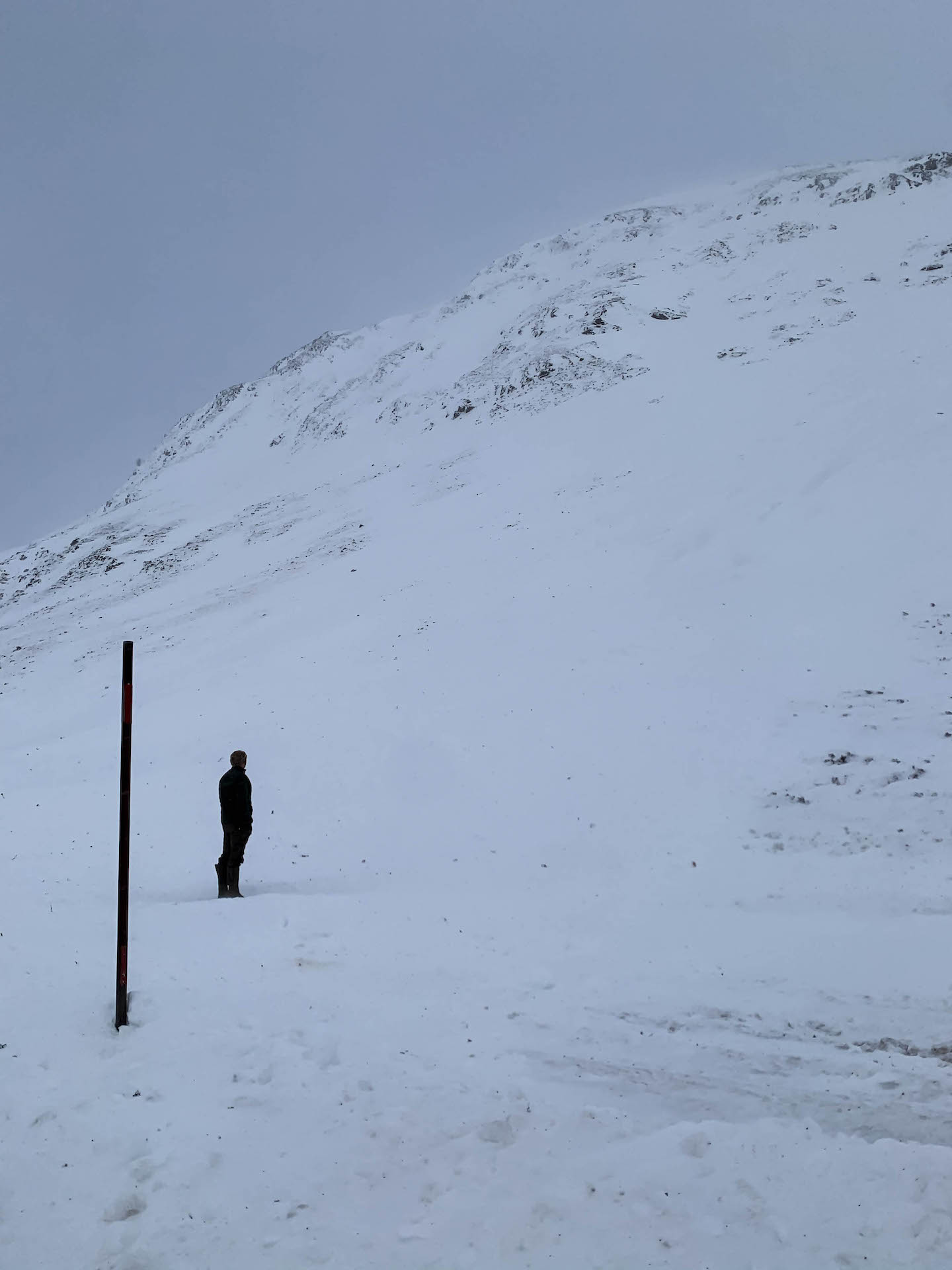 Looking back up the avalanche path… Thanks to Kevin from BMRT for the photo. 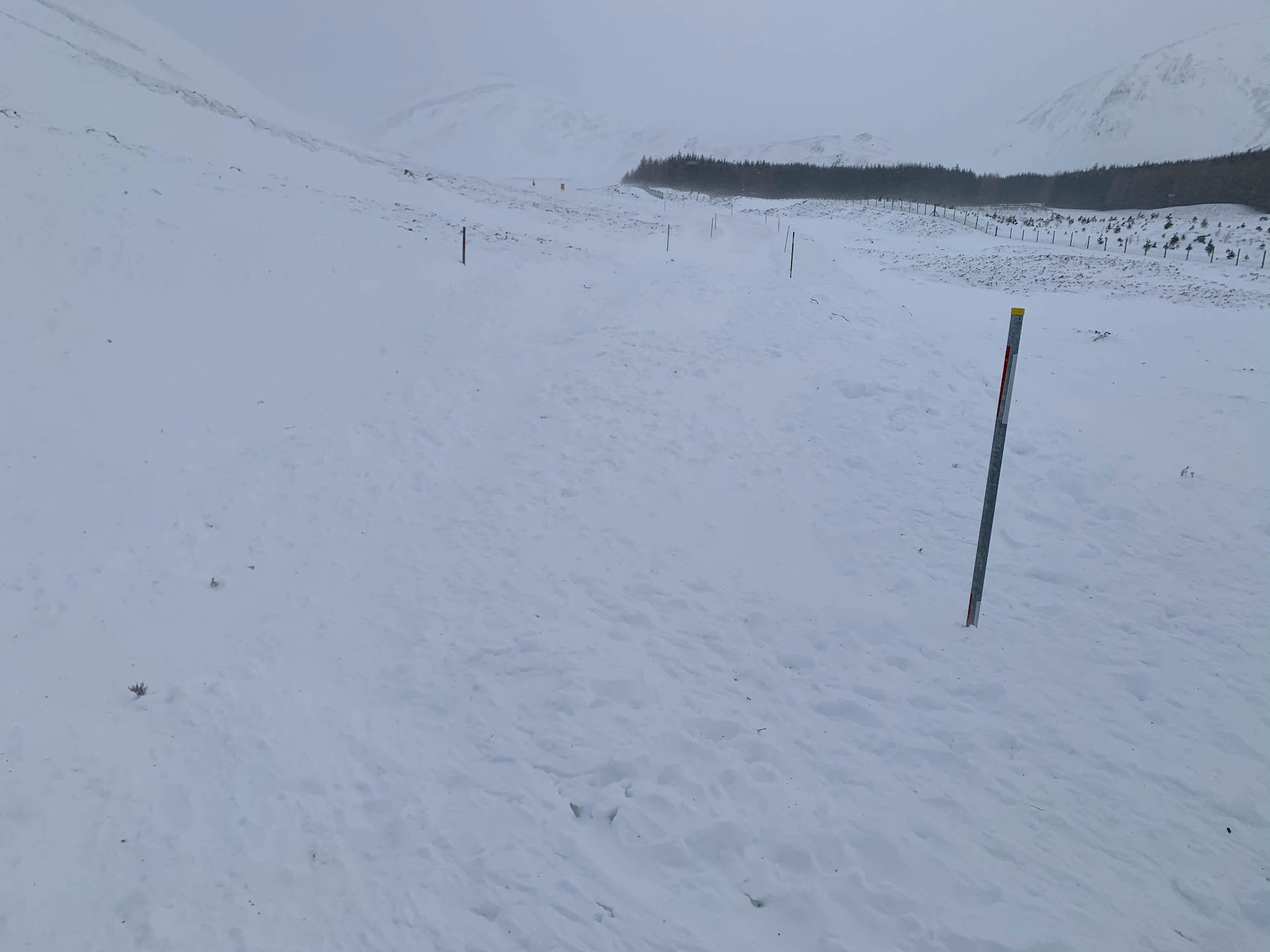 The A93 is under the debris there somewhere! Photo credit – Kevin from BMRT. 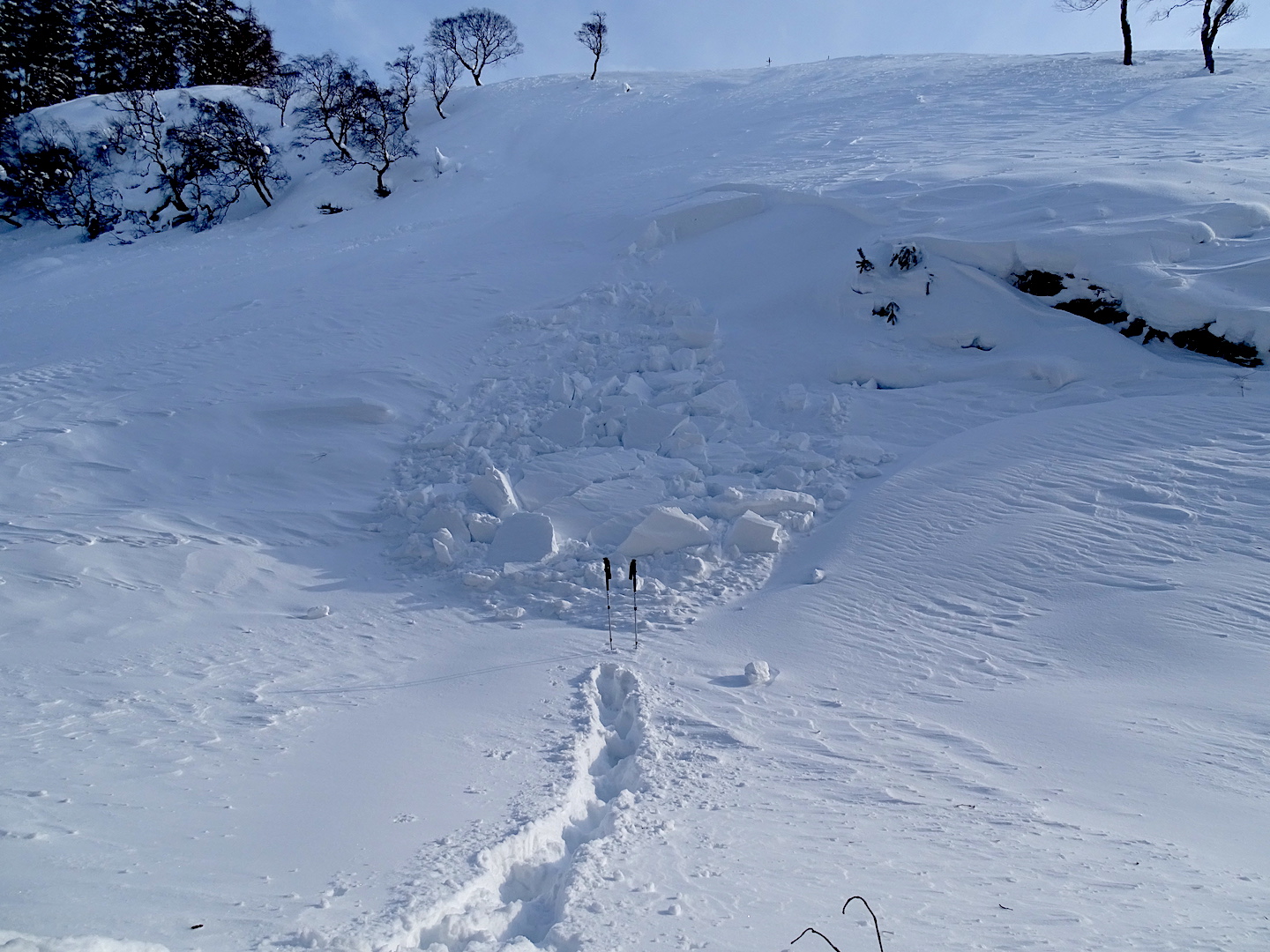 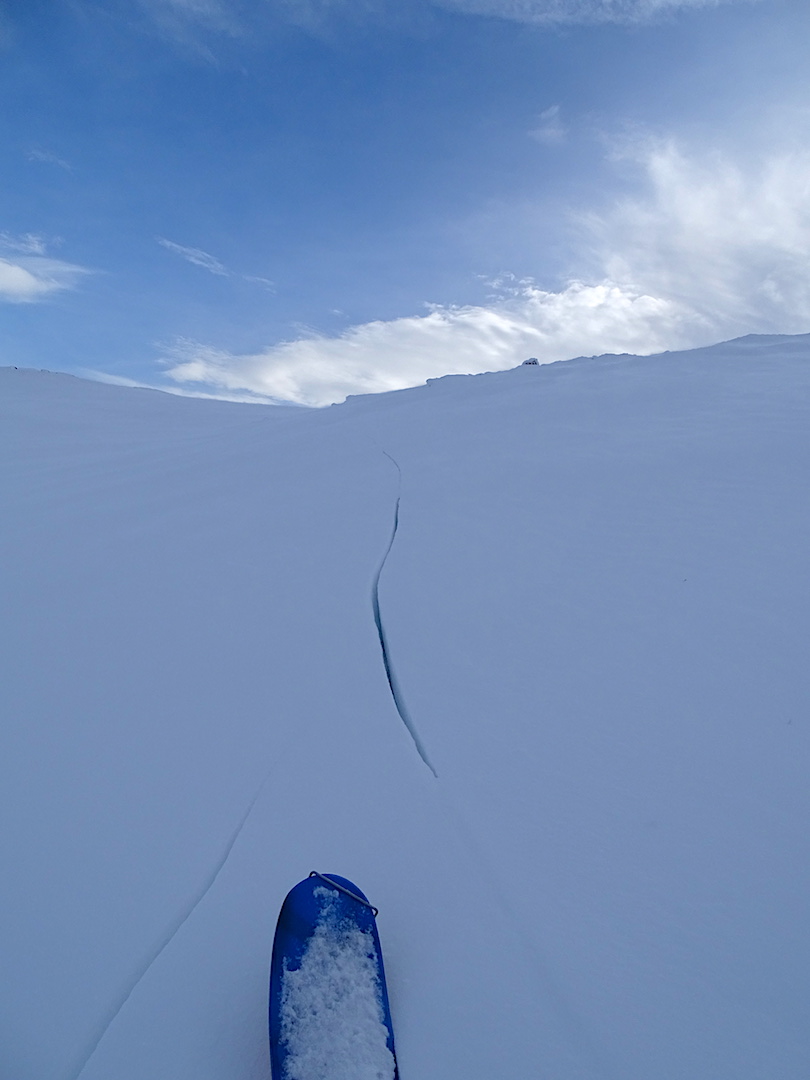 Shooting cracks after settling a snow bowl. Crack went right across the slope to the left of the photo. 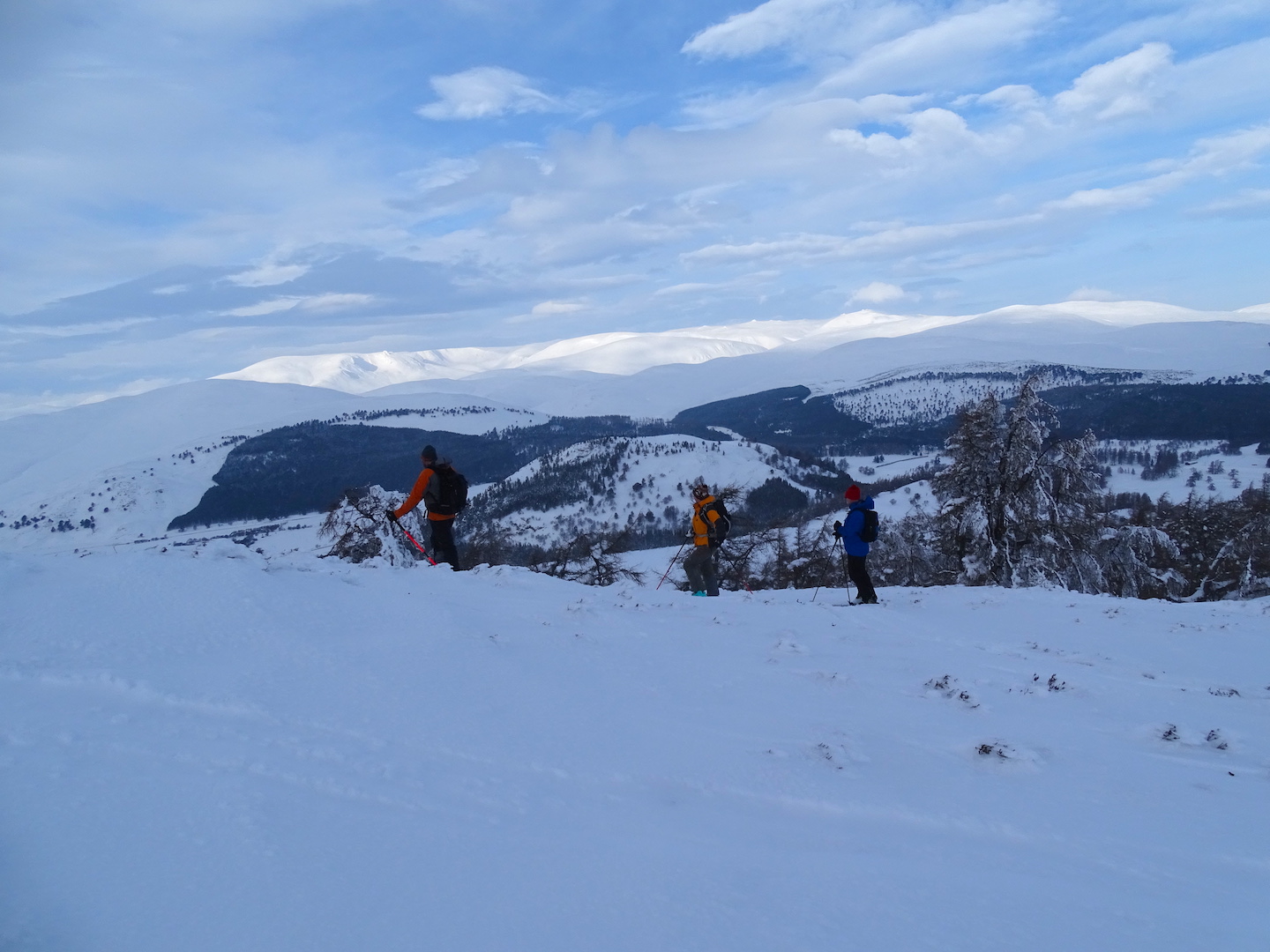 Cracking views across to the main Cairngorms