Not quite the volume of snow forecast and the winds had been fairly variable during this last period. Travel around the slopes required care in the poor vis. In terms of category today I think it could have been a Considerable 3+ today but I’m certain there would have been avalanches so left it HighÂ CategoryÂ 4. Stability was generally poor on steeper slopes.
Â
Grampian Police MR and Braemar MR were out training today.
The mighty Malc gave me a lift ‘up the hill’ . The shovel in this pic was a major part of the ascent. 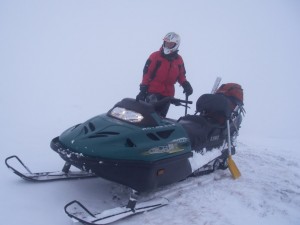 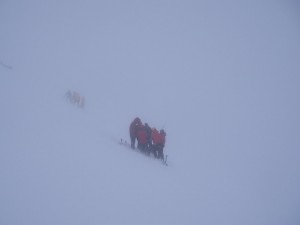 Above Pic: After I returned from my wanderings I hooked up with the team again. Â Just like the penguins in Antarctica the boys from the windward side move down out the wind behind their mates and so on. Eventually they will arrive at the cafe.

Actually they covered a few different topics, a good job given the weather.