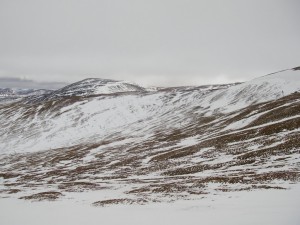 Bit of boring photo – but we’ve used it so you can get an idea of the snow cover. In fairness you are probably looking at the thinnest aspects with N and E facing corries holding more snow than you can see here. It has been very mild today but we’ve been lucky in that it has been mainly dry – if there had been more rain the damage to the snow cover would have been far worse. It should be a little cooler tomorrow with the freezing level lowering eventually to 1000 metres but very strong SW to West have been forecast (80mph, gusting 120 mph.)
Sam