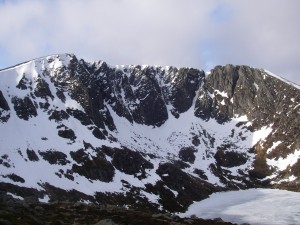 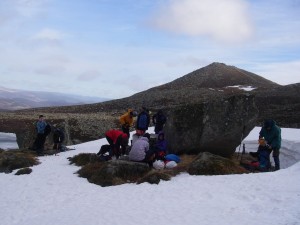 Gearing up at the stretcher box 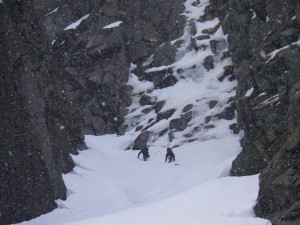 Climbers in the bottom of Raeburn’s during a snow flurry 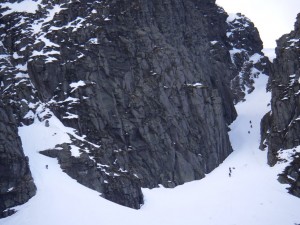 It was great to see a few climbers in Lochnagar today – most people headed for either Black Spout or Raeburn’s Gully. We only had a few snow flurries and the old snow was starting to firm up so conditions underfoot were good for chomping up the gullies. The ice that was on the old line of Parallel B last week is now on the snow apron and the Aberdeen MRT guys that were also in the corrie today reported quite a lot of rockfall yesterday (Saturday ) when it was thawing. Braemar MRT were also on the hill – giving up their Sunday lie-in to get some more training in!

Forecast for tomorrow is overnight light snow showers developing into a band of snow during Monday. Strong winds will drift deposits, so there is going to be windslab formation. Watch out for the locations posted in the main report. Another windy day with 45mph becoming 60mph. The freezing level is also due to rise later in the day from 600 metres to 1100 metres.