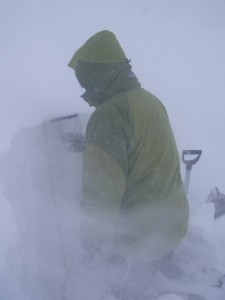 Conditions have been variable throughout the area. Today the winds have increased and started to blow around the dry snow cover.
We had to trail break into Lochnagar today,the main track is actually ok but the footpath to the col is tedious.
The crag is covered in light dry snow, there is very little ice around although Lochnagar has refrozen.
Passing Eagles Rocks a couple of days ago we could see plenty ice but I’m not sure of it’s quality. Water is still running here and the Dubh Loch was not frozen. Snip Snip at Corie Kander has ice but is still running, there is not much ice in the main corrie.
Strangely it feels like there is more snow in the valley than on the hill. Beinn a Bhuird and Derry Cairngorm have a light cover with no base.
We should see quite a bit of snow during Friday eve/Saturday. This will be accompanied by strong winds, there will be plenty of deep drifts around. I think the challenge will be driving around or getting back!
The ski touring on higher hills will be poor, partly the weather but mostly there is no base. However tracks in the forests or Glens will be fine and may be a good
option.